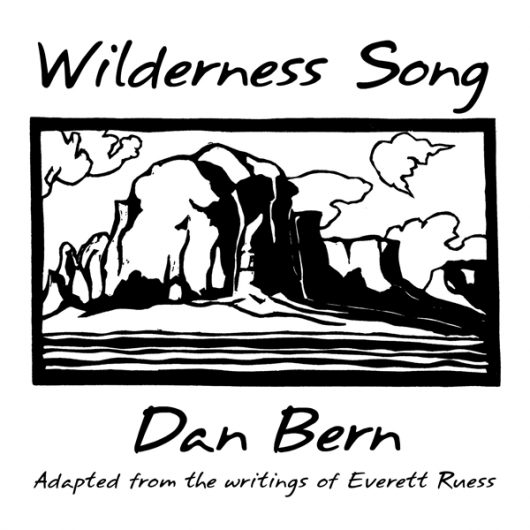 Finding himself in the ‘Wilderness’

On his new album, “Wilderness Song,” Dan Bern sings of dropping out of society to live in the Utah desert. In the song “Flapjacks,” for example, he exults in the pleasure of camping alone in a canyon where there’s “no music but the sound of rushing water that breaks on painted rocks below.” On “Budget,” Bern sings, “Here’s my budget: rent — nothing, telephone — nothing, electricity — nothing.” And on the title track: “I have loved the twisted trees, red sand a blowin’ ’neath the turquoise skies / I have felt the rain a-driftin’ and slept behind the waterfall.”

Bern, however, is not singing about himself. He’s singing in the voice of writer and artist Everett Ruess, who, in 1934 at age 20, left society to wander alone through the Utah canyon country and then disappeared. Bern used to love hiking near his former home in New Mexico, but now he’s too busy, living in Los Angeles and writing music for film, television and his own albums.

One of three albums Bern, 47, released this year, “Wilderness Song” is the soundtrack for a new documentary produced by Jonathan Demme and directed by Lindsay Jaeger. “Everett Ruess: Wilderness Song” tells Ruess’s story and is just now starting the rounds of film festivals. For the soundtrack’s 15 songs, Bern drew as much as possible from Ruess’s own words.

“It was like we were co-writing in the same room,” Bern says, “and I was the guy with the guitar while he was the guy with the notebook and ideas. In listening to these, I feel like it’s very much me; other people have said that, too. But at the same time I tried to stay true to his character as if I were an actor. He was a guy I would have liked to hang out with and travel around with. Who knows? Maybe if he had lived he would have written songs himself.”

The album is as stripped down and spare as Ruess’s one-man treks into the wilderness. Bern limits himself to his voice, harmonica and acoustic guitar. “I have felt the rain a driftin’,” Bern sings over the title track’s jaunty lope, “and slept behind the waterfall and Aspen glades that whisper wild sorrows / In cool sweet grasses I have lain and I have heard the ghostly murmur of regret.”

“I identified with his sense of the beauty that he was seeing everywhere,” Bern says of Ruess, “of his feeling of relying on himself. He’s not explicit about it, but his writing has a spiritual sense that comes from being outdoors. Anybody who’s been in any big natural setting will feel some of that.”

This wasn’t Bern’s first venture into writing for the screen. He’s best known for the funniest songs in the 2007 comedy “Walk Hard: The Dewey Cox Story,” starring John C. Reilly as a country singer much like Johnny Cash who evolves into a folk singer not unlike Bob Dylan.

“I was one of the people they asked to write some songs for Dewey,” Bern says, “and I so fell in love with the idea that I put everything else on hold and I wrote 100-some Dewey songs. I had pretty free rein; they were instances when they hadn’t asked for a song, and I said, ‘He needs a song here,’ and they used some of those. . . . After a while, though, it was hard to know where Dewey stopped and I started.”

Bern also wrote for Jake Kasdan’s first movie, “Zero Effect,” and Demme’s 2007 documentary, “Jimmy Carter Man From Plains.” When Demme directed the off-Broadway play “Family Week” in 2010, he commissioned Bern to write two songs. One of those, “Swing Set,” a duet with Emmylou Harris, is on another of Bern’s new albums, “Drifter.”

That album, unlike “Wilderness Song,” isn’t organized around a theme; it’s just a collection of his best recent songs. And terrific songs they are — from his duet with Harris to his post-apocalyptic dystopian fantasy, “Mexican Vacation,” and his post-recession utopian fantasy, “Rainin’ in Madrid.” Best of all is the first track, “Luke the Drifter,” a talking-blues fantasia that references Bob Dylan, Alexander Pope, Jonathan Swift, Muhammad Ali and Hank Williams to conclude: “Life ain’t tragic mostly / Life is magic somely.”

“I have certain songs that are kind of rambling and take their own shape, more like a person talking. . . . A long time ago, I dispensed with the feeling that I had to understand everything that was going on in my own songs,” Bern says. “When you do anything long enough, whether it’s writing songs or building chairs, you can’t always explain what’s going on, but if it feels right you go with it.”

When he does just go with it, the songs don’t sound like Dewey Cox or Everett Ruess. They sound like Dan Bern.