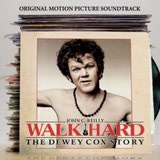 If you love classic country music, contemporary folk, protest songs, rockabilly and corny showtune pop songs, and you need a good laugh, look no further. Built on a solid foundation of rather talented songwriters like Dan Bern and Marshall Crenshaw, this soundtrack is mostly just downright funny. What else could you expect from the folks who brought you Anchorman and Talladega Nights.

The title track of Walk Hard was written by none other than Marshall Crenshaw. Clearly a spoof of Johnny Cash, the tune is corny as all get-out, with great lines like “I took it in the face and walked as hard as I could.” What does that even mean?

Every song is performed by Dewey Cox star John C. Reilly (A Prairie Home Companion, Talladega Nights, Chicago). One of the best highlights, though, is when Reilly is joined by Angela Correa on “Let’s Duet”—a sweet love song chock full of innuendo and sharp puns. “(I Hate You) Big Daddy” is an Elvis-style rockabilly tune about, well, pretty much what it sounds like it’s about.

Dan Bern’s “Dear Mr. President” is a scathing letter to the president, or as Reilly introduces, “for the so-called commander-in-chief, wherever you are…wherever your heart is.” “Dear Mr. President,” he sings, “I want you to know I am deeper than you, listen and learn.” Then, in typical Bern fashion, it proceeds to offend just about every group it could possibly offend, calling to mind every ridiculous stereotype in a way that would be offensive if it weren’t so completely candid (and funny).

Another Bern masterpiece is “Royal Jelly,” which Reilly sings in his best Bern-esque/Dylanesque voice. It’s about nothing, really, and it just goes on and on with hysterically meaningless, killer lines like, “Stuffed cabbage is the darling of the laundromat / and the sorority mascot sits with the lumberjack.”

“Dewey Cox” does a silly Tom Jones-ish lounge version of David Bowie’s “Starman.” “Beautiful Ride” is another anthemic Bern contribution, co-written with by Mike Viola. It’s a very show-tuney number about mortality, in the least serious possible way. Finally, the soundtrack ends with another Bern tune, “(Have You Heard the News) Dewey Cox Died,” which tells the story of Cox’s death in a touching, silly way.