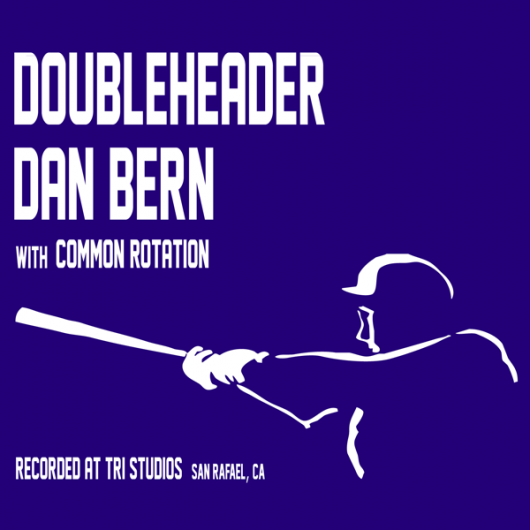 A Singer Collects Stories From the Stadium
By KEN PLUTNICKI

The contemporary folk musician Dan Bern had written so many songs about baseball over the years that they finally reached a critical mass. With a gig approaching at the Baseball Hall of Fame earlier this month and the availability of willing musicians and a studio, it finally made sense, he said, to record a bunch of them and bring the songs in from the road.

“I was pretty stringent about it,” Bern said recently in a phone interview. “I didn’t want to have songs that just had some oblique baseball reference. I wanted each one to be a baseball song, not a song with Jackie Robinson showing up in it for a second.”

The result is “Doubleheader,” recorded with the band Common Rotation and released July 4 on the heels of “Drifter,” his first studio album in almost six years. “Doubleheader” provides a home to 18 of his baseball songs, some of which had already been anthologized in Jeff Campbell’s “Diamond Cuts” series.

“It’s the languid pace of the game, I suppose,” Bern said, explaining baseball storytelling’s place in film, literature and music, including his, over the decades. “When you’re watching it, your mind has time to take little flights. All these stories we’ve heard since we were kids about Merkle and Ruth, they just kind of take hold.”

In his version of “Merkle” Bern, who is 46, imagines a different world had the Giants rookie Fred Merkle not committed his infamous baserunning gaffe against the Chicago Cubs in 1908. In “Joyce and Galarraga,” Tigers pitcher Armando Galarraga’s near-perfect game is again ruined with two outs in the ninth inning by Jim Joyce’s safe call at first. Bern captures the abrupt ending (“Perfect game — no!”) and also Galarraga’s oh-well attitude afterward: “It’s just my one and only perfect game.”

“Come Back Andy Pettitte” is sung as a gentle plea for the Yankees pitcher to come out of retirement. Happily outdated, it became newly apropos when Pettitte fractured his left ankle on June 27. Songs about Bonds, Gehrig, Buckner and Zambrano (Carlos, not Victor) also appear.

(Time out for a related story: when Bern played the Hall of Fame in Cooperstown, N.Y., on July 4, he did not play two of the 18 songs on the album: one was not memorized and one was about Pete Rose. “They banned Pete Rose, you know,” Bern said. “So they banned my Pete Rose song, too.”)

Bern’s baseball allegiances have shifted over the years. He is from Iowa, once lived near Wrigley Field and now lives a three-minute bicycle ride from Dodger Stadium. But “if they had to bury me in one uniform it would probably be a Giants uniform,” he said.

“Doubleheader” hits its stride with “The Golden Voice of Vin Scully,” a version of which is also on “Drifter.” The song consists of three vignettes, each focused on a person feeling disconnected to the world. What the three have in common is their aloneness, and the solace that later that evening they will be able to settle in with Scully, a radio and the Dodgers game, and feel connected again.

“That one resonates with me,” said John Huber, chairman of the political science department at Columbia University and a longtime friend of Bern’s. “I’ve never listened to Vin Scully, I’ve never lived on the West Coast, but for me it was Jack Buck.”

Huber recalled how he became a Cardinals fan in 1967. During the World Series that year his father began picking him up at kindergarten and taking him home to watch the games. He would pitch a Wiffle ball to him between innings and tell him about Bob Gibson and Lou Brock. Huber went on to play college baseball in the 1980s, but he tore cartilage in a knee.

In “This Side of the White Lines” Bern sings:

If his knees hadn’t got sick
He’d have made the big leagues, just like his hero, the Mick
He wore No. 7 on his back, like the Mick
But his knees got sick
So he had to quit.

Huber has told only a few people close to him that Bern once wrote a song about him. “I wasn’t nearly as good as I was in the song,” he said. But he is being modest: he was an academic all-American at Division III Lawrence University in Appleton, Wis.

“Dan was around when my dad was dying and he wrote that song very soon after it happened,” said Huber, who was 23 when his father, also named John, learned he had kidney cancer. His father received the diagnosis in February 1986, around spring training, and died in October. “It just means a lot when a close friend recognizes a personal experience you’re going through in such a beautiful way.”

A student of the game might say the song explores the complexities of life; highlights the bonds baseball can create between fathers and sons; contrasts how a baseball game can go on forever but how life is short.

“It’s just sort of the difference between the perfect world on the field and the more difficult, often sadder world on the outside,” Bern said.

There’s no shortage of storytelling in baseball.