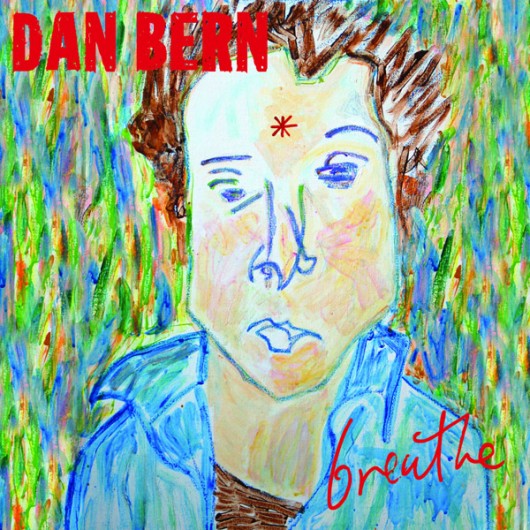 The first sign that Dan Bern’s latest album Breathe is a good one: a baseball reference. “And my friend comes in / Sees old Barry on the wall / Says ‘you ought to have an asterisk up there’ / So I painted on the wall / With a paintbrush in my hand / An asterisk, but what the hell, he’s still up there,” is how Bern begins “Trudy”, the first song on Breathe. The implication in such a metaphor is plainly laid out as the song progresses, that no matter how you qualify your mistakes, no matter how many excuses you have for them, even as you accept them, they’re still there. They still happened. And somehow, you have to live with it.

This is not the Dan Bern we once knew, the one who would hide his Big Ideas in sophomoric couplets, nor is it the one who would cuss ‘cause he liked the sound of it. This isn’t even the Dan Bern of New American Language, the man who dreamed of Utopia and meeting God. No, this is a Dan Bern whose Big Ideas have gotten smaller, as he tries to parse the personal relationships and struggles of everyday Americans. Granted, he still sounds like the Dan Bern we always knew, with that nasal timbre that makes Dylan fans do double takes, and he’s still toting a band around for his studio efforts, fully orchestrating them with all of the drums, bass, harmonica, and even banjos, mandolins, and keyboards where he feels them necessary. Producer Chuck Plotkin seems to be going for a traditional Rock-Americana sound by way of Bruce Springsteen’s mellow side, though Dylan still takes the prize of most obvious influence, thanks to Bern’s narrative style and not exactly unique vocal phrasing.

And yet, while there may not be a single original musical idea on the entire album (and there isn’t), none of it sounds tired or clichéd, thanks partly to the earnest performances given by all involved, and also thanks to Bern’s still-unique way of telling stories. He inserts “I” into all of his songs, giving every single one of them an autobiographical feel, whether they’re as personal as they sound or not. It’s a trick that makes every song sound like a diary entry (or, if you must, a blog entry) from someone far more literate than your average MySpace addict, drawing the listener in and holding that listener hostage for 45 minutes while he recounts his deepest darkest secrets.

There are hints, however, that the songs aren’t necessarily about him, which further drives the idea home that he could be talking about mankind in general just as much as he’s talking about himself specifically. Many of Breathe‘s first-person characters are epic generalizations, metaphors for a mindset rather than literal tellings of the travails of an actual person. “Suicide Room” is a beatiful tale of perseverance, a man beaten down by the world who takes on the smaller but no less significant challenge of not killing himself in a hotel room where two others have ended their own lives. It is bleak, perhaps, but it speaks to kind of a desperate perseverance, the human spirit giving itself every opportunity to succeed at something: “Figured if I can’t beat this world / Maybe I can beat this room”, he sings, and the listener can’t help but hope that Bern’s “I” succeeds.

Breathe is Dan Bern’s “nice” album, it seems. It’s orchestrated nicely enough, it won’t offend anyone, and it does just fine whether it’s in the background or the foreground. Bern’s still a master with one-liners—“I could do card tricks you wouldn’t believe”, he says in his title-track’s examination of an everyman’s experience as a self-made messiah, and “We’re all just gasoline on the funeral pyre” is his idea of a moment of mortal perspective—but as a whole, Breathe is a portrait of maturity. This is a Dan Bern that’s getting older and wiser, not fighting his age like, say, Ben Folds, but quietly accepting it. If you can identify with this sort of sentiment, there’s a good chance you’ll fall in love with Breathe; if you can’t, you’ll probably kind of like it anyway, for while it may not reach out and grab you by the throat, it’s also impossible to hate. Sincerity in matters of self-reflection can have that effect on an album.