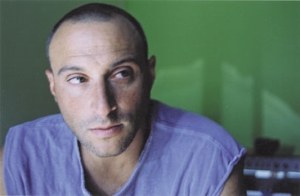 Since his self-titled major-label debut in 1997, Dan Bern has had to deal with the “new Dylan” hype that attached to him.

“At the very beginning I think it felt flattering,” the Iowa native (born Dan Bernstein) explained from his home in New Mexico. “And then it felt like the opposite of that. Like I have no identity of my own. And then the third phase is mostly just kind of ignoring it, because you don’t know what it means anyway.”

Nonetheless, the comparisons were easy to draw. There was the voice and vocal style, somewhere between Dylan and Petty. There were the melodic and rhythmic similarities, perhaps unconscious from listening in his formative years to both Dylan and Dylan’s influences—Woody Guthrie, Lightin’ Hopkins, Hank Williams and others. There was the stream-of-conscious wordiness characteristic of some of Dylan’s work (even apart from the various “Talkin’ Blues” homages). As much as anything, there was all this packaged in a man with a guitar and sometimes a harmonica.

The comparisons broadened with the release of 2001’s New American Language and the introduction of a full band, The International Jewish Banking Conspiracy (IJBC). A wonderfully varied pop-rock production, New American Language showed as much influence from Elvis Costello and Bruce Springsteen as from The Great Poet.

Bern’s new release, Fleeting Days, builds on the sound of New American Language, producing yet another nicely variegated integration of the sounds of our pop, rock, blues and country masters. Working with the IJBC for the past couple of years helped Bern to flesh out his songs.

“[Fleeting Days] is a band record more than anything,” he explains. “It happens when I’m playing with the band a lot. You just start thinking of parts differently when you’re actually writing it.”

Fleeting Days also completes the process of lyrical maturation begun on New American Language. Bern’s lyrical style has become much more his own. His lyrics are crisper, his themes and metaphors sharper. The stream-of-conscious style of early albums has given way to well-crafted … well … songs.

What has always set Bern apart is his lyrical content. He fearlessly mixes the stuff of romance, family and friends, politics, religion, sports, pop culture icons and dreams. He doesn’t compartmentalize these aspects of life but approaches them more or less holistically—the way we experience them—with humor and insight.

“Now I feel the changes coming down”

That is not to say, however, that his focus has not changed. As I worked my way through Bern’s back catalog, I was struck by the considerable difference in his pre-New American Language work. His early work was not just stream-of-conscious. It was overflowing with pop icons and dadaist sequences, with a bawdy sense of humor that would have made Lenny Bruce proud. At times, it approached inspired brilliance. But often the mix merely made for briefly amusing and interesting novelty songs.

With New American Language and Fleeting Days, Bern becomes more of a lyrical craftsman. He still cuts a broad swath across life, but he seems to have more to say and is more focused about saying it. He still uses his wit, but it’s more sophisticated, with less ironic distance.

With New American Language, we find someone with “a dream of a new pop music that tells the truth, with a good beat and some nice harmonies.” We see the brilliance of “God Said No,” where the narrator begs God to let him go back in time to right historic wrongs, and the anxiety of “Toledo” or “Black Tornado,” where “everything is changing faster than I can describe.”

On “My Love Is Not For Sale” from World Cup, a CD/tour-diary booklet released via his website (www.danbern.com) last year, Bern sings:

It’s all been bottled, packaged, drawn to scale
But my love, my love is not for sale
Take just a minute of your day
Tell me one thing that you would live for
Dying, dying’s easy, getting easier all the time
Tell me one thing not to throw it all away for

In Fleeting Days, Bern laments, “Nowadays it’s hard to write a line / My own thoughts bore me” on “I Need You” and “Half of me wants to crack the code / The other half don’t care” on “Fly Away.” Intense longing is eloquently expressed in “I Need You:”

He concludes the album by probing, “Are you gonna follow your soul / Or just the style of the day?”

It’s not that such sentiments were absent from his earlier work. In “Wasteland” from Dan Bern, the singer bemoans, “I watched as the best of my generation / Abandoned their dreams / And settled for making a little money.” And in “Estelle,” he sings:

Is holdin’ someone’s hand as you walk through town

Nor is it that he has abandoned his sense of humor, pop references, non sequiturs or dadaisms. Witness the parade of dream-like images of “Thanksgiving Day Parade” from New American Language, or the pop culture romp of “Graceland” from Fleeting Days. Or especially “Talkin’ Al Kida Blues” and “My Little Swastika” from The Swastika E.P., another Internet-only release sandwiched between his latest label releases.

The difference is that tighter threads hold the songs together. They are more focused, and we’re not distracted by parades of celebrities or proclamations like “I got big balls” or “I am the Messiah.” The humor, the pop references and the non sequiturs that do remain are there to serve the song, rather than acting as novelties or gimmicks (or resulting from the lack of self-editing).

“Judge me by the songs I write”

When I asked Bern, a Jewish descendent of Holocaust survivors, for his perspective on how his songwriting has changed, he demurred. “I don’t know. What would you say? I don’t know. I don’t know that I’m entirely conscious of how it might be different.”

Last year, however, he had the following to say to Monica Datta at the Tartan, Carnegie Mellon University’s student newspaper:

“From a personal standpoint, the period that produced these songs [from New American Language] was a period of tremendous change and upheaval. Some of it has to do with going to Lithuania, where my Dad and his family were from,” he said. “I think I’m more comfortable with myself and don’t feel the need to posture or point at myself. ‘God Said No’ is a crystallization of ideas I’ve been trying to get ‘right’ for a long time.”

As our interview delves deeper into Fleeting Days, Bern does begin to address how his songs have changed. “It used to be that every single thing that happened, it turned into a song,” he said. “Lately, I’ve been writing in different forms, like stories, even longer stuff.”

“The truth, with a good beat and some nice harmonies”

He also differentiates the thrust of Fleeting Days’ songs. “They’re not like past records of mine where there were some songs that are pretty heavy—like ‘God Said No’ [New American Language] or ‘Lithuania’ [The Swastica E.P.],” he explains. “Those are like deep, deep heavy songs with a lot of breadth.

“And some of these songs on this record, they’re really focused about what they’re about. There’s a dominant metaphor running through it. … I think they’re fun to sing, and hopefully they’re fun to listen to. They’re this kind of thing that maybe kind of gets in your head a little bit.”

Some of the lighter pop songs on Fleeting Days Bern had sitting around for a while (“Jane” is a decade old). “With the last record, I thought I was going to use some of these songs,” he says, “and then I started writing songs like ‘God Said No.’ And once again those songs kind of got pushed aside.”

“The newer songs on this record—‘Superman,’ ‘Closer to You,’ ‘Soul,’ ‘Graceland’ and ‘City’—there’s probably more depth than breadth to those songs,” he adds. “But they rub against the other ones in a way that I kind of like. You know, I could have done a record of all those old songs, and I could have done a record of none of them—just what I wrote in the last year, and for whatever reason, it seemed like pulling some old ones and having some brand-new ones on the same record was just an interesting way to go this time.”

The net result is an immensely enjoyable album that is an early candidate for Paste’s 2003 20 Signs of Life.