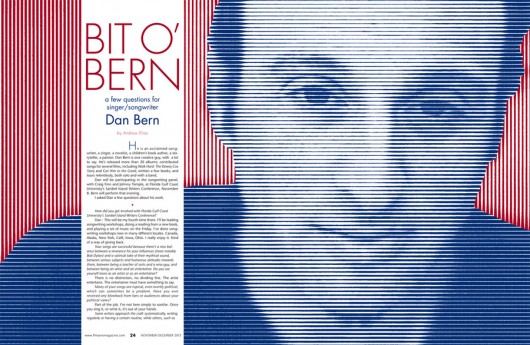 an interview by Andrew Elias

HE IS AN ACCLAIMED SONGWRITER, a singer, a novelist, a children’s book author, a storyteller, a painter. Dan Bern is one creative guy, with a lot to say. He’s released more than 20 albums; contributed songs for several films, including Walk Hard: The Dewey Cox Story and Get Him to the Greek; written a few books; and tours relentlessly, both solo and with a band.

Dan will be participating in the songwriting panel, with Craig Finn and Johnny Temple, at Florida Gulf Coast University’s Sanibel Island Writers Conference, November 8. Bern will perform that evening.

I asked Dan a few questions about his work.

How did you get involved with Florida Gulf Coast University’s Sanibel Island Writers Conference?

Dan: This will be my fourth time there. I’ll be leading songwriting workshops, doing a reading from a new book, and playing a set of music on the Friday. I’ve done songwriting workshops now in many different locales. Canada, Alaska, New York, Calif, Iowa, Ohio. I really enjoy it. Kind of a way of giving back.

Your songs are successful because there’s a nice balance between a reverence for your influences (most notably Bob Dylan) and a satirical take of their mythical sound, between serious subjects and humorous attitudes towards them, between being a teacher of sorts and a wise-guy, and between being an artist and an entertainer. Do you see yourself more as an artist or as an entertainer?

There is no distinction, no dividing line. The artist entertains. The entertainer must have something to say.

Many of your songs are topical, even overtly political, which can sometimes be a problem. Have you ever received any blowback from fans or audiences about your political views?

Part of the job. I’m not here simply to soothe. Once you sing it, or write it, it’s out of your hands. Some writers approach the craft systematically, writing regularly or having a certain routine, while others, such as Keith Richards, talk about being lucky to be in the room when the song ‘arrives.’

What is your creative process when songwriting or writing prose?

Songs can come anytime, anywhere. They kind of float in the air and you gotta catch ‘em. Other kinds of writing you need to sit down and pound it out. One of your most popular songs is ‘Estelle.’

Can you tell me about writing that song?

I was making my first record. It just poured out. The recorded version is the first time I ever played it.

You wrote some of the songs John C. Reilly sings in the hilarious film, Walk Hard: The Dewey Cox Story. You’ve also written songs for other films, including Get Him to the Greek. How is writing for films different than writing for your own albums?

It’s very refreshing and freeing to do that. Like getting to be 16 again and writing songs from the beginning. You use yourself, but you also have to get out of the way.

Your recent album, Doubleheader is a compilation of songs about baseball. How did that album come about?

I’ve written baseball songs for a long time, since I lived in Chicago and went to Wrigley Field. It just sort of happened. I got a good bunch of guys together and we made the record. We played the whole set of songs last summer at the Hall of Fame in Cooperstown.

On another recent album, Drifter, you sing ‘Swing Set,’ a duet with the legendary Emmylou Harris. How did that come about and what was that experience like?

She’s obviously an icon and a fantastic singer. I wrote the song for Jonathan Demme. He was directing a play in New York City a couple years ago. He was the one who thought of Emmylou for the female part. [Bern wrote the title song for Demme’s documentary film, Jimmy Carter: Man from Plains, and is working with Demme on a documentary based on the writings of Everett Ruess.]

In addition to songwriting and performing you have also written two books – Quitting Science, under the pseudonym Cunliffe Merriweather, and a children’s book, Cleaver the Gronk under your real name, which you also illustrated. Why did you choose to write Quitting Science under a pseudonym?

There’s actually been a bunch of books – 7 or 8 now. Quitting Science was about a scientist who goes around giving lectures and demonstrations. So it was Cunliffe’s book.

Any advice to writers?

Don’t worry about the business or getting a million hits on YouTube. Don’t worry about formulas and all that. Song is a big playing field. Have fun with it. Find your voice. Sing a lot. Sing what you want to say.