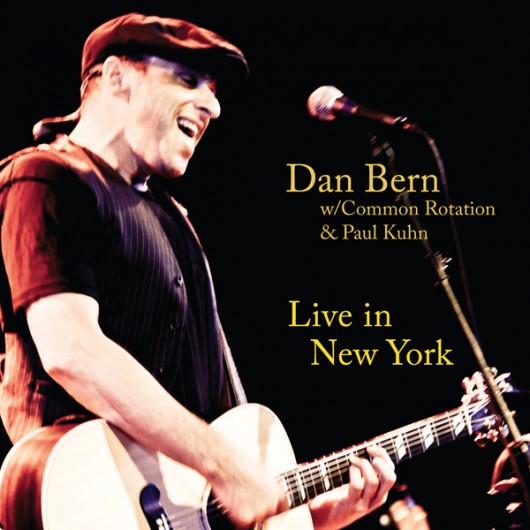 Live in New York finds Dan Bern once again taking his delightfully offbeat bag of songs and comical cultural commentary to the stage in a fitting follow-up to 2010’s extraordinary Live in Los Angeles. This time, however, friends and tourmates Common Rotation assume the role of full-time backing band, lending richer, fuller folk textures to Bern’s songs. It’s a change that distinguishes this record from its live predecessor but also leaves the listener yearning a bit for those rougher, more abrasive moments usually interspersed in Bern’s performances.

A mellowed “Black Tornado” opens the proceedings and quickly demonstrates Common Rotation’s appeal, as they perfectly accent Bern’s acoustic strumming and add delicate layers to the vocal parts, particularly on the song’s uplifting later choruses. Bern’s nasally pining on Fleeting Days standout “I Need You” mingles beautifully with Paul Kuhn’s cellocaster. “I’m Not the Guy” and “Baby Bye Bye” come across well enough but lack some of their natural instrumental and vocal bite due to their softer, expanded treatments here.

As always, Bern uses the stage to air newer material and a brand of esoteric topical song that is unlikely to land on a proper album (see: “Joyce & Galarraga”). “Economy”, a previously unreleased song and the record’s finest track, envisions a more Spain-like America with champs like Rafael Nadal, poets like Federico GarcÃ­a Lorca, and Hollywood movies that the whole world can love. Bern’s country-tinged wail of “It’s raining in Madrid tonight/ It’s snowing in my head” is one of the prettiest vocals he’s ever recorded. “Talkin’ Tea Party Blues” finds the leftist Bern accidentally attending a Tea Party meeting, where, among other farcical incidents, “Some guy stood up and shouted, ‘Health care is a mortal sin’/His tracheotomy tube fell out/He stuck a cigarette in, and I lit it for him.” The a capella “Isner & Mahut”, inspired by last year’s historical marathon Wimbledon tennis match, lands some laughs with classic Bern lines like “Isner and Mahut on the Wimbledon lawn/Played until the day was gone/Played ‘til the chimes of old Big Ben/‘Til Christ returned and left again.”

Bern pulls on the heartstrings near the record’s end, dedicating “Oh Sister” to Nicole (presumably his sister), a song in which a grown kid brother—once equal parts sweet, annoying, and even a little perverted—looks back and pays tribute to his older sister, everything tied together by the boyish, inquisitive chorus of “And where would Willie Mays have been without Jackie Robinson?/And who can say what I’d been without you to lead the way.” Bern and Common Rotation end Live in New York with spirited Americana/folk-tinged renditions of Liz Anderson’s “The Fugitive” and Woody Guthrie’s “Deportees”, but neither are particularly memorable and feel underwhelming after the stirring “Oh Sister”.

Bern deserves credit for doing more than simply repackaging the successful formula of Live in Los Angeles. He repeats no songs from last year’s live release and gives fans a chance to hear older and newer songs alike in a slightly different style than he is accustomed to embracing onstage. The simple fact is that Bern is probably just a little better as a lone gunslinger than as a member of a posse.